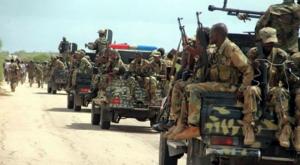 WASHINGTON, D.C., DISTRICT OF COLUMBIA, UNITED STATES, November 22, 2022 /EINPresswire.com/ — The tension between Somaliland and Puntland, a neighboring federal member state, has escalated to an exchange of gunfire between members of the Somaliland and Puntland military in the Qararo area of the Ayn region. News reports from Somalia claim that “two soldiers died in the battle while six soldiers were injured.”

The escalation in tension between Somaliland and Puntland is one of many destabilizing incidents occurring in the area. On November 13, 2022, the two main opposition parties in Somaliland, the Waddani and UCID, joined forces and refused to recognize Somaliland’s President Abdi as the legitimate president of Somaliland after his government canceled the scheduled presidential election and extended his term by two years.

Unlike his stance on Somalia, Congressman Perry strongly supports Ukraine’s sovereignty and opposes the Russian-backed Ukraine separatist Donetsk and Luhansk regions. Congressman Scott Perry also supports the removal of Congresswoman Ilhan Omar, an immigrant from Somalia, from the U.S. House of Representatives Foreign Affairs Subcommittee on Africa. These two facts have only increased the accusations of racism on the part of Congressman Scott Perry.

The weblinks to the noted news articles are noted below.

For all inquiries relating to this press release, please contact:


EIN Presswire’s priority is source transparency. We do not allow opaque clients, and our editors try to be careful about weeding out false and misleading content.
As a user, if you see something we have missed, please do bring it to our attention. Your help is welcome. EIN Presswire, Everyone’s Internet News Presswire™,
tries to define some of the boundaries that are reasonable in today’s world. Please see our
Editorial Guidelines
for more information.

Somalia: "We haven't had enough time between one disaster and another." – Doctors Without Borders (MSF-USA)